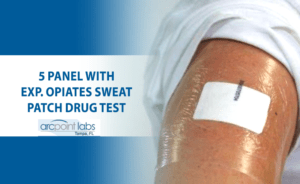 This is a  Sweat Patch (or Drug Patch) used for sweat analysis and is worn on the skin for 5 days or longer for testing drug and Opiate abuses in a person’s system.

No. Drugs have been known and detected in sweat since the early

1970’s. The principle challenge with respect to sweat testing has been

the collection of sweat. The PharmChek® Sweat Patch is a

non-occlusive device that facilitates the collection of sweat.

No. The testing procedures used for the analysis of sweat are the

same well-established procedures used for the analysis of urine

Yes. The FDA, through its procedures have cleared the PharmChek®

Sweat Patch as both a specimen collection device and as a

scientifically valid procedure for the detection of drugs in sweat.

detecting occasional or recreational drug use.

detects the parent or non-metabolized form of the drug. This is

particularly important when testing for abused drugs such as heroin

use. Heroin is rapidly metabolized to 6-acetyl morphine then to

morphine. Consumption of poppy seeds can also produce a positive

morphine result, as can the use of a codeine based medication.

Because the sweat patch can detect heroin, it can determine if a heroin

user is attempting to mask the heroin use with either codeine or poppy seed use.